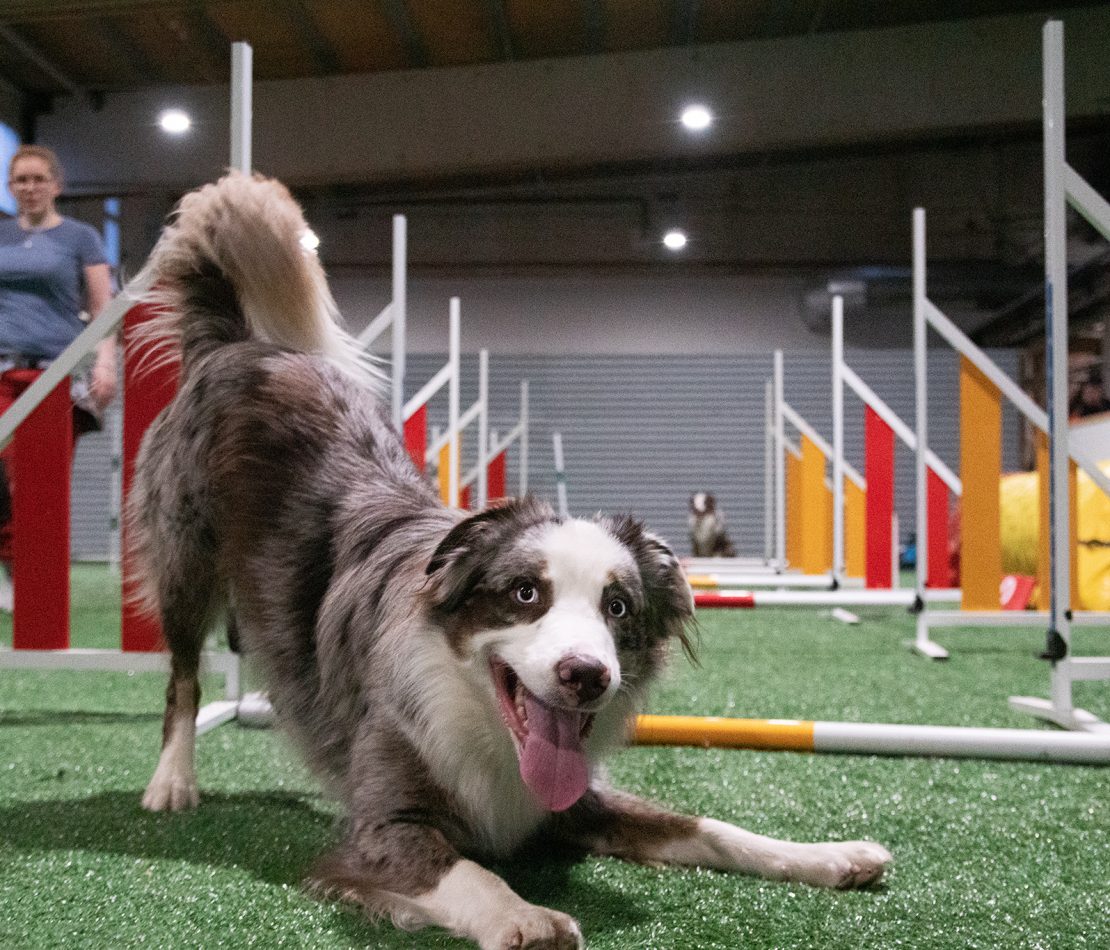 With great strength comes great agility! Or, that’s what I really, really hope for. Else we’ve spent over a year of fitness training for nothing. Will the hours spent in balance, proprioception, core support and jump technique training pay off? 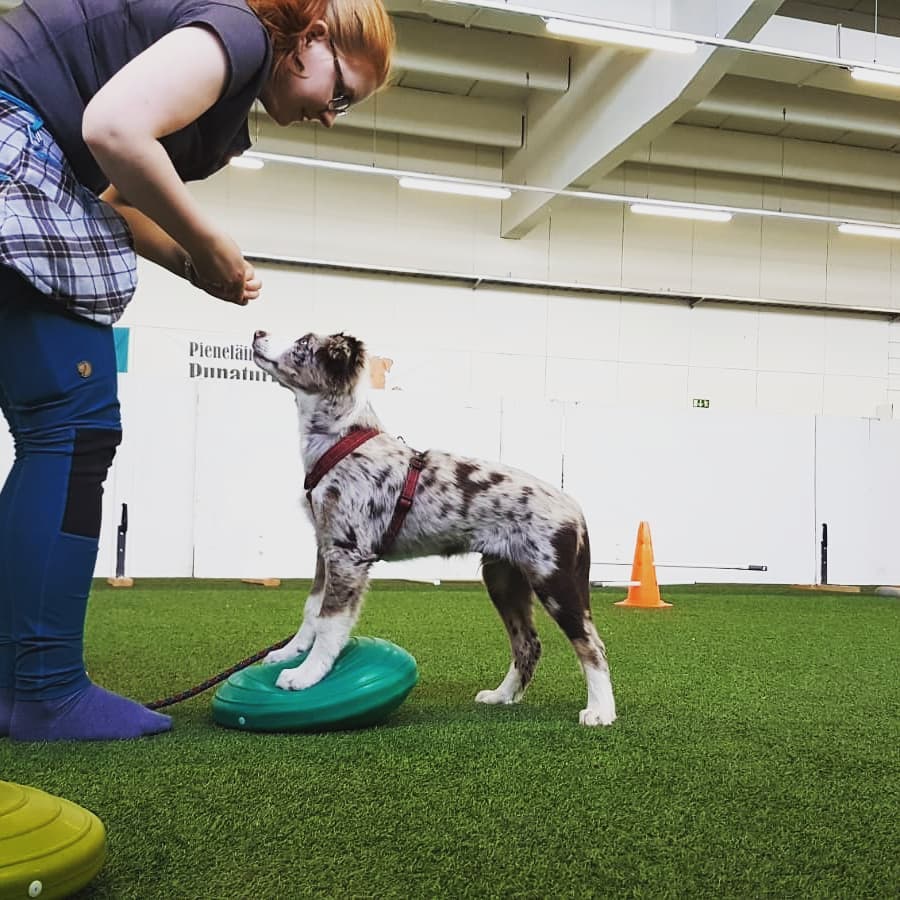 I think dog fitness is a great way to start hanging out and playing with your puppy! Fitness, even before it’s really fitness training, was a great way to get Kiri working with me. In puppy fitness class he learned how to behave in training halls with other dogs around as well as where to put his paws. Getting him used to the loud noises of others doing agility on the other side of the fence while he still needed to focus and keep calm has really given a good basis for us to build on. Although, well… The keeping calm – part has slipped a little bit. A lot. Sometimes. Always.

Would you train for a sport by only doing that sport? For example, when I still trained horse riding, I didn’t just ride horses. I also stretched, did pilates, balance practice, jogged, went to the gym. We even had some training sessions on a saddle but not on a horse, working with a physiotherapist to figure out balance and alignments. I believe that I was a much better rider for all the supporting practice I did – and that’s why my dog also does fitness training instead of simply running courses. I want to give him all the tools he needs to safely be as quick as he can be! And simply be faster, of course. It also gives me something to do in the living room without moving anywhere, and still gets the dog happy and tired – while developing strength so we can do better later agility. Triple win. 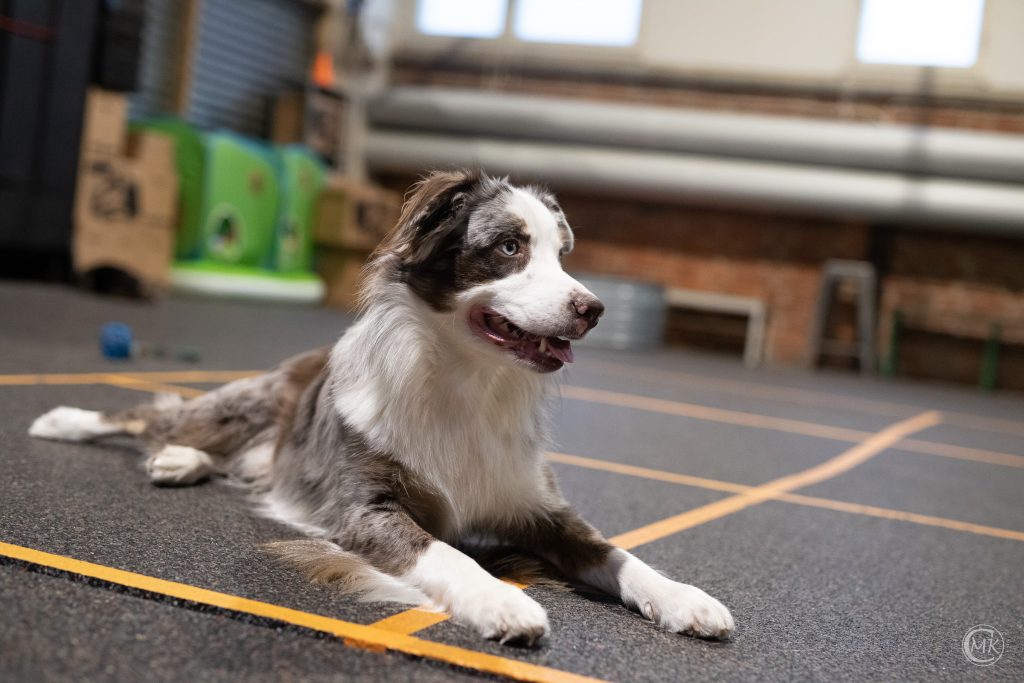 I would like to remind everyone (including me!): quality before quantity. We all know that doing weight training with too much weight on the bar just leads to compensating, twisting, or just hurts. We all also know that a couple days after hitting the gym, everything hurts. Or, well, that feeling when your muscles are so strained, holding a soda can feels like a major feat. Newsflash: if you’re doing progressive fitness training with your dog, he’s also feeling it. He  needs time to build strength, you’re not just tricks.

Your dog needs time to recover from fitness training, not just agility. 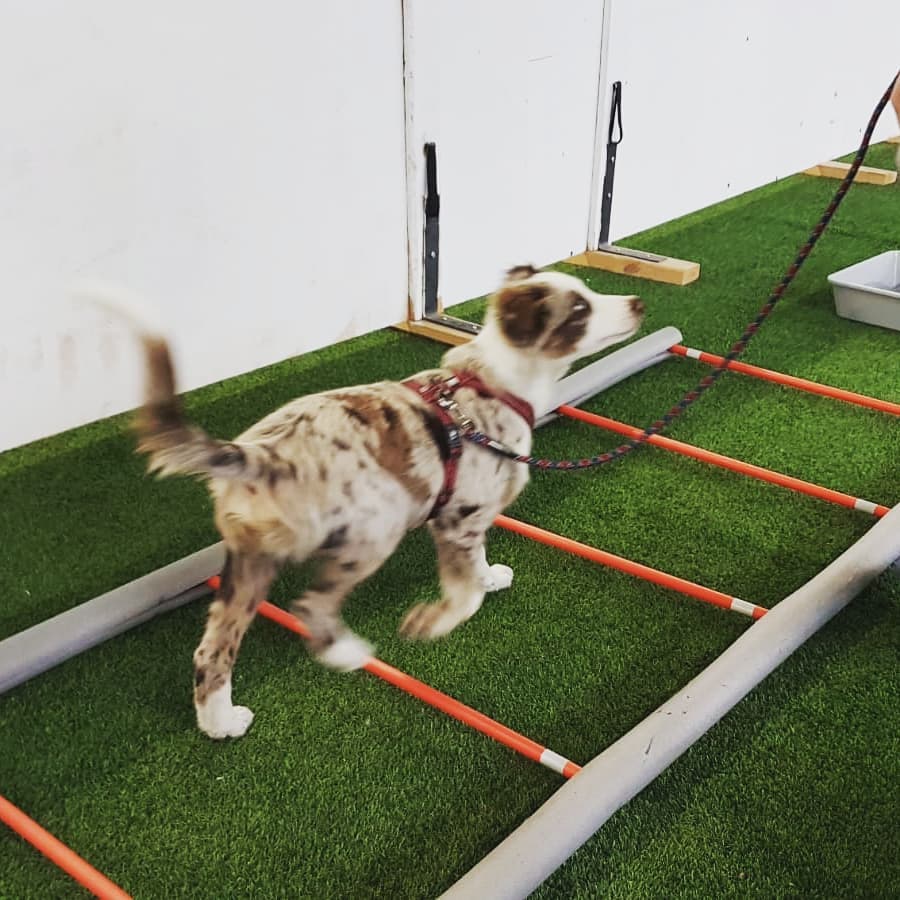 As a puppy, Kiri mostly just got used to the idea that paw placement matters. The training  included things like simple obstacle courses with low cavalettis, wobbly (but not too wobbly) balance pillows and different surfaces. From there we slowly graduated towards position changes, first on solid and then on unstable surfaces. Other moves that are still part of our routine include lifting diagonal paws while standing and putting all the paws into a bowl to practice collection – starting from a biiiig bowl, training slowly towards a smaller one. 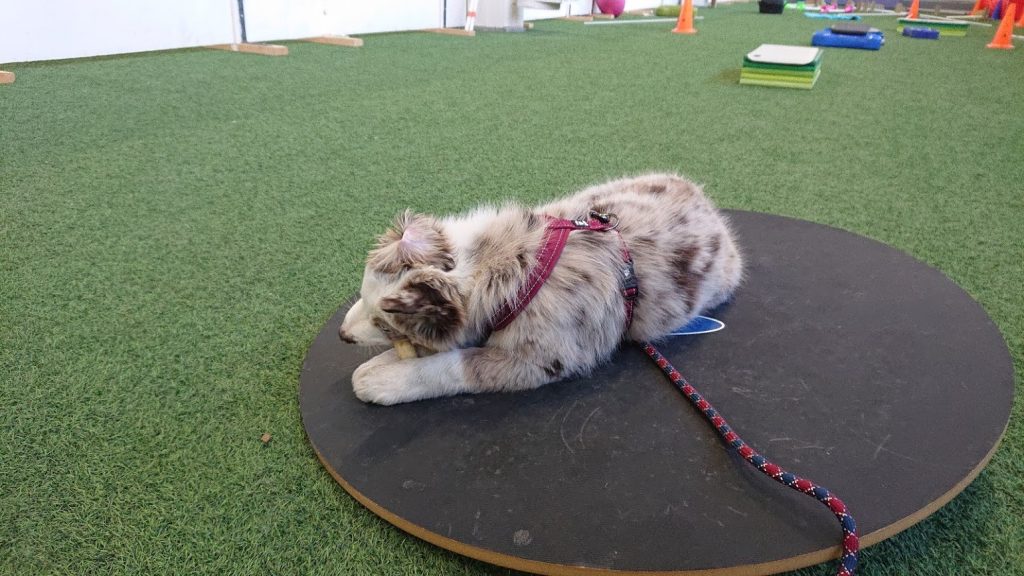 Kiri took it pretty casually, especially when there were snacks. That was most of the point, really.

Our favorite exercise continues to be putting all the paws inside a bowl. We just do it better now! 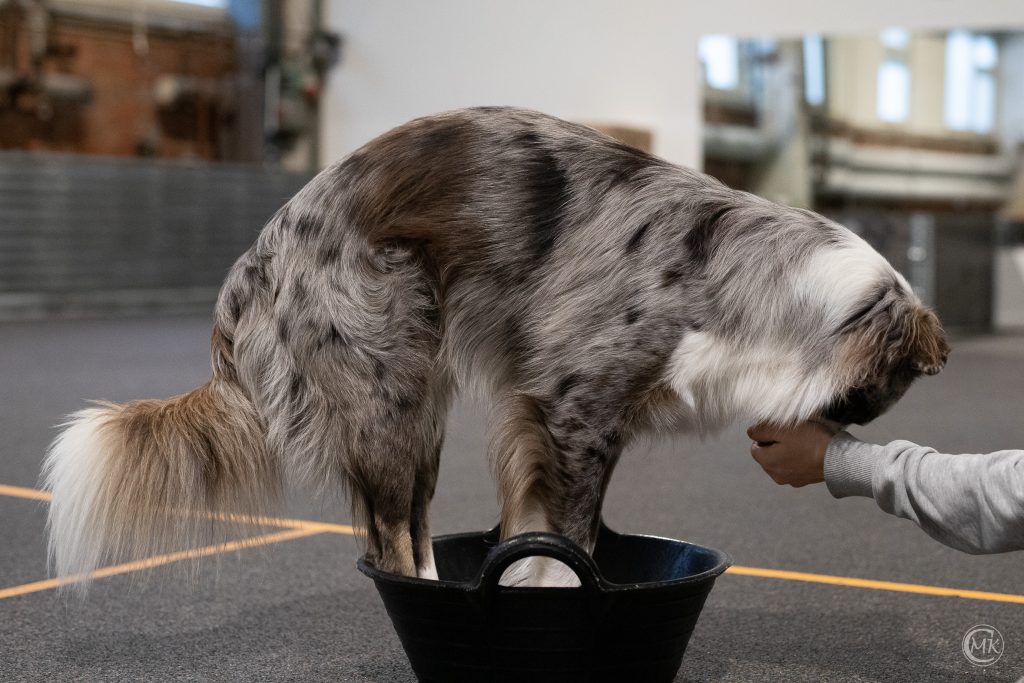 This winter we’ve been participating on a fitness course for agility dogs, meeting monthly. We do have more than the bowl trick though! Other exercises focus on building strength with squats, activating shoulder support, improving proprioception, all the things important for an agility dog. And so many more.

I love that every month I get advice and feedback on whether I’m doing it right. Not everything you see someone do on Instagram or at your training hall actually fits your dog, or your dog at the moment. Trotting cavaletti helps precisely nothing, if your dog can’t do it well. Similarly, it isn’t important that the dog can do really deep squats if he loses his backline, shoulder support and all in all integrity in the move. After the fitness training sessions, Kiri tends to need three to four days to regain his usual elastic movement – far longer a recovery than after agility.

Jump technique work we started somewhere around the time Kiri was half a year old, on and off. His performance has changed a lot while he’s grown and continues to fluctuate. Even after training jump technique for almost his entire life, we still go back to the basic exercises – and it’s okay. He’s grown up a lot, developed more strength and drive, it’s no wonder he needs the practice again. Or that’s what I tell my impatient self, hopefully it’s also true! I’m happy I’ve given him time to figure out how his body works, though. If I’d started on high jumps and running courses around the time when he was still pretty likely to just crash into the middle of a jump grid… Well. So far, only very little running at obstacles (or walls) on agility courses. Hopefully we’ll keep it that way. And hopefully, all these hours and days spent on balance, proprioception and fitness training will eventually pay off. Some day, when we can run full agility courses, maybe we will be better, faster and stronger. Let’s see! Keep your fingers crossed for us! Having patience to build foundations is hard, in case you noticed just how much of this is me convincing myself. 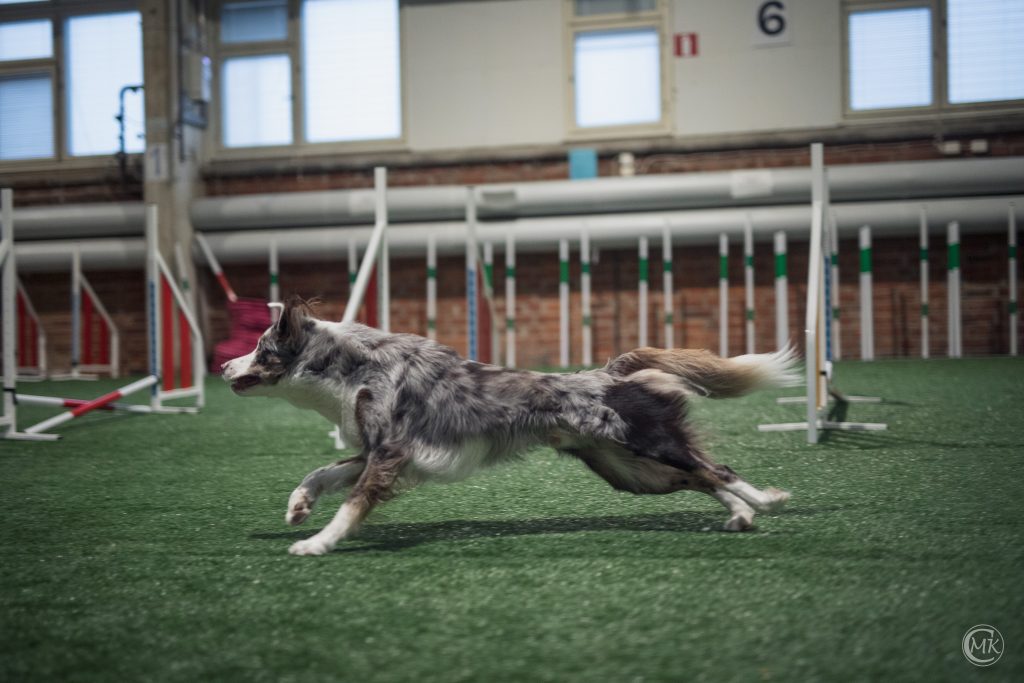 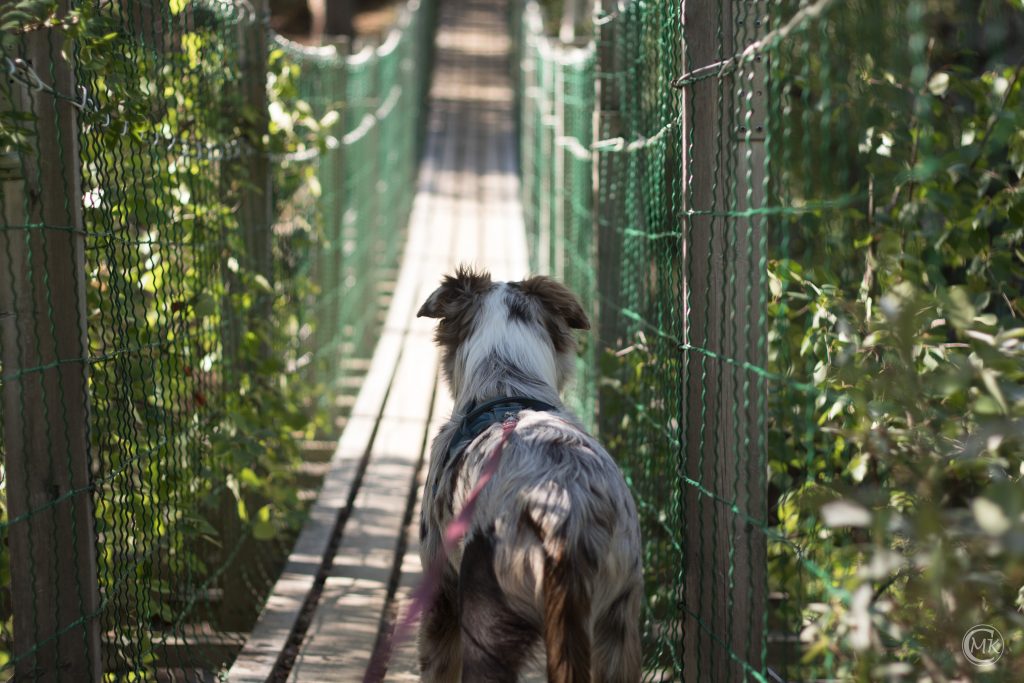 On another note – it’s good for hikes too, not just agility! Had we not practiced walking on all those weird, uneven surfaces; would he have been as brave a mountain climber? As steady on his feet on suspension bridges? As comfortable running on sliding sand on the side of a mountain, as happy prancing around on slippery rocks in a stream? When he slips on the mountain, he’s got the supporting muscles to keep him from injury, and keep me from needing to carry him home from the hike.

It’s probably equally important to develop your own fitness, too, but… Having the dog do the work is more fun, isn’t it? Perhaps it should be my turn next. I doubt I’ll look as happy doing it! Though maybe, if I kept getting treats for all the reps I did. In the meantime I’ll focus on arm training with two very efficient trainers! 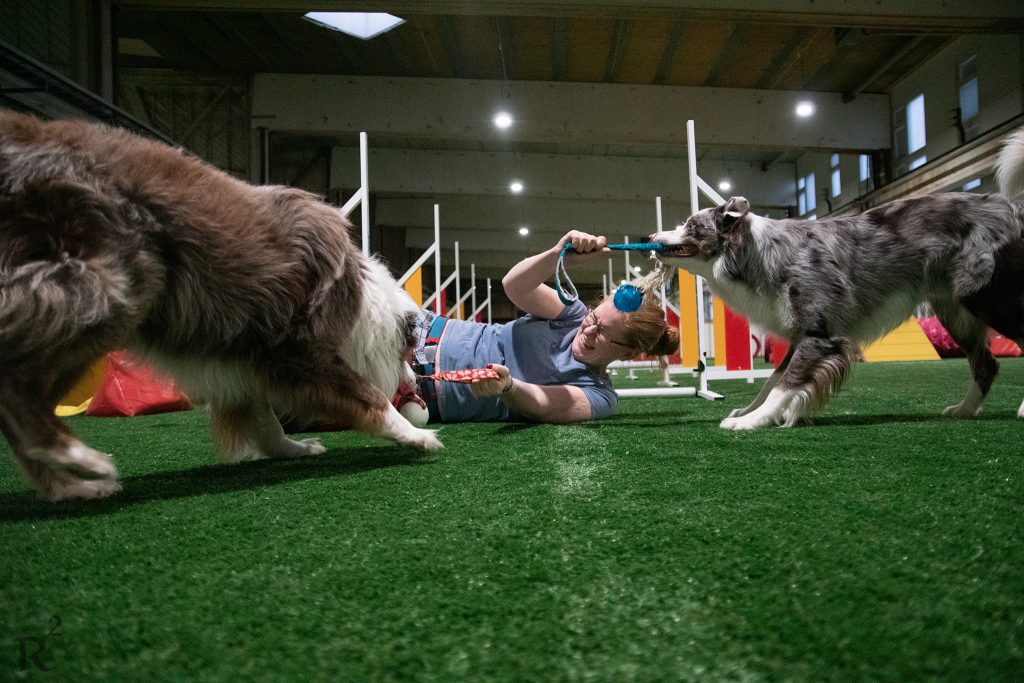 Writer is Marjut Köylijärvi: a dog enthusiast and a scientist with two Australian shepherds. Sometimes I pretend I have other life, but I really don’t. That’s okay, because I like this one. Live the life you love!