By day, I go to work, play with the dogs, eat, repeat. Just like all the other people, because clearly, everyone has a pet to play with. But by night…

…well, actually, I sleep. But I dream big.

Back about six years, when I was still a poor biomedical university student, I decided I wanted to go hiking in Scotland. I’m not really sure why – perhaps it was the whiskey (which I may or may not have been drinking at the time), the mountains, or the kilt-wearing men, I honestly don’t know. Maybe all of the above. Somewhat similarly when I was three, I decided I wanted an Australian Shepherd. I’d seen one for five minutes, after all, and it was cute! And fluffy! I also really wanted to go to the moon and drive a Ferrari. Possibly at the same time.

Now what I spend my days doing is science. I graduated and I work with cell and gene therapies, trying very hard to cure cancer. I did mention I dream big didn’t I?  And while I’ve yet to be to the moon, I do in fact spend a lot of (read: all) my time hanging out with two Australian shepherds. Kiri is turning two in February, Pubi reaches the respectable age of 11. We walk in the forest near and far, train some obedience and a whole lot of agility, and watch poor but nostalgic scifi tv on the couch. The now-retired ten-year-old does whatever he feels like doing, which occasionally includes what I told him to do.  I love them both with all my heart! Except for the times I really hate them intensely for a couple minutes. Please don’t judge me, Kiri ate the wall in his youth.

And we did go to Scotland. 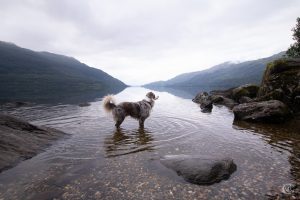 Last spring, I decided this was The Summer. I talked about it to everyone who would listen and arranged for Pubi to be cared for by some wonderful friends since his fitness for mountain-climbing isn’t what it used to be. I browsed beautiful pictures, planned. Decided I was mad. Decided I was certifiably crazy, panicked, threw the plans out of the proverbial window. Figured I didn’t really care, and planned again. And so, just like any other adventure, mine and Kiri’s started with one step out the front door on a regular Sunday morning.

You combine five countries, eight thousand kilometers, twenty national parks, mix well and then add a pinch of mountains and a dash of waterfalls and you’ve got one woman’s dream. 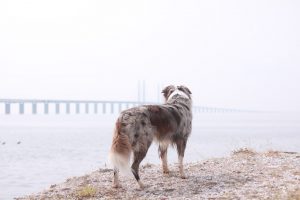 In more practical terms, me and Kiri took a ferry to Sweden, drove over the bridges to Denmark, through Germany and the Netherlands to take another ferry to UK and finally end up in Scotland. We were on the trip for three weeks, just the two of us. Other than a single night in a bed and breakfast after many rainy days, we slept either in the car or in a tent, carried all our food and gear with us, and didn’t really even meet other people. I loved it, though it was at times terrifying.

While there are a million things I could be and maybe will be writing about that trip, this time I’d like to talk about traveling alone with a dog. Apologies about the curious phrasing, but I can’t really think of a better way to say it. You’re not alone, of course, I consider Kiri my best and closest friend – but he isn’t a person, for all he is. That’s the beauty and difficulty of it, isn’t it? He won’t read the map for you or worry about tomorrows weather. He doesn’t talk, and thus can’t tell you everything’s going to be okay and the trip is worth all the money and time you put in it. When you’re desperately tired, angry, hungry, and have nowhere to go (the flipside of being free to anywhere), he doesn’t tell you what to do. A dog does something far more important. It seems to be nearly impossible for most people.

A dog is there with you. 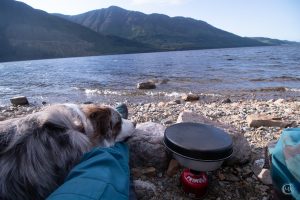 The driving days through Europe were long and boring, but thankfully interspersed with walks. I’d tell my phone to navigate somewhere, pick a random waterfall or something, and stop there. A dog never argues about your choice. Never says “but actually that other one looks better”, leaving you to brood for the rest of the trip about how you really wanted to see that place where you didn’t stop. A dog doesn’t comment on the fact you haven’t brushed your hair for a week, judge you for off-key singing, or protest when you decide to take a tiny winding road just for the sake of scenery. A dog is not in a hurry.

I almost was. For a big part of the trip, I thought I needed to do something specific to succeed in having a Dream Trip. See all the places. Experience everything. Without Kiri, I’m absolutely sure I would never have stopped trying to just rush through a list of things I thought a Dream Trip included. Kiri made me stop and just be, too. I think that might have been the most valuable part of the trip. You may be different, but for me, being alone isn’t easy. It’s frighteningly free, I’m afraid of doing something wrong, of not doing all the right things, of going and of not going. Afraid of what other people think of me, even when they’re not there. Overly worried of how the world perceives me, when in all honesty, I don’t think the world cares.

Traveling alone with a dog… 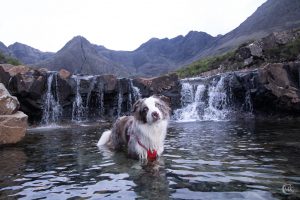 I learned that all the morning and evening walks we did were adventures. I learned to love the simple acceptance of a dog curling by my feet to sleep while I had a cup of coffee and just looked at the mountains for a half hour, absentmindedly scratching him behind his ears.  We walked if we wanted to walk. I smiled and waited while he splashed around, chasing bubbles in the streams running down the mountainsides.  We both ate sitting down on the ground, and we curled up to sleep together in the tent, his chin resting on my ankle. 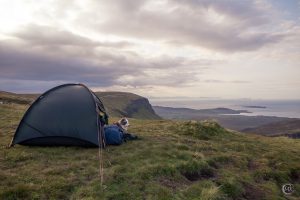 Kiri taught me that it’s great fun to run to a lake wearing a raincoat and then roll in the water, while it’s pouring rain. If you’re already soaked, why not play? I taught him it’s lovely to sit in the tent and look at the sunset. With him running up the mountain just for the simple pleasure of running really fast, how could I not laugh and enjoy the climb, however steep? He taught me that even if you’re on a summit, caught in a thunderstorm… if you can’t do anything about it, just sleep. The morning will be better. On the way back, we spent almost an entire day lounging around a bit of Swedish forest. I sometimes threw him a toy, he sometimes came to beg for scratches, we ate and enjoyed laying down in the sunlit heather. Did absolutely nothing and enjoyed every bit of it. 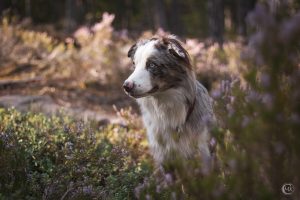 I learned that the way to achieve your dreams is to just go. Just be. And just remember it’s your dream, no-one else’s. And that even the little things can be everyday adventures.

But like, actually… How To have your Dream Trip in 3 simple steps! Or something.

Don’t let the law ruin your fun. For example, Kiri needed tapeworm treatments, vaccinations and a passport. Also check e.g. that your dog breed is allowed in the country, that you’re allowed where you’re going (some national parks don’t allow dogs), and whether for example the dog has to wear a muzzle on the ferry. Have all the documentation and passports with you.

The dog needs to be okay with your travel plan. He needs a pretty wide set of skills – walking in loud, noisy places like ferry car decks is tough. Settling down outdoors, in a tent, in a pub, in a cabin can be new. In England and Scotland, many of the hiking paths pass through fields with sheep or cattle, so Kiri needed calmness and control to walk on them together with me. Terrain may be challenging, and your dog needs to be fit enough to handle it. Importantly, at least in Scotland, he needs to be comfortable with rolling in mud and sloshing through bogs. Kiri was a natural at this.

You need to be okay with your travel plan. It’s your trip. Why are you doing it? Is it really the way you want to do it? If yes, go! If not – make it yours, then go! But while it can be wonderful, remember that it also takes a lot of courage, maybe a few tears. Dream big, but don’t be afraid if it isn’t all rose-colored clouds and rainbows. That just makes it even more awesome!

Writer is Marjut Köylijärvi: a dog enthusiast and a scientist with two australian shepherds. Live the life you love!